Back in the spring, Bearing had a post about an experimental chore system she was implementing with her children. I was very intrigued. I watched her updates and after she showed positive results, I decided it was worth a shot with my own older children.

We first implemented our version of the system in the middle of August as a practice run. I bought some popsicle craft sticks, had each girl choose a color, and colored the tips with the assigned color and wrote their name on each stick. We found a jar to put the sticks in, placed the jars on their dresser and commenced the experiment. I decided that each stick would be worth 25 cents at the end of the month. I wanted to start with a low bar for two reasons. First, we don't have a lot of money to spend on children's chore money and second, I wanted room to be able to give raises later. 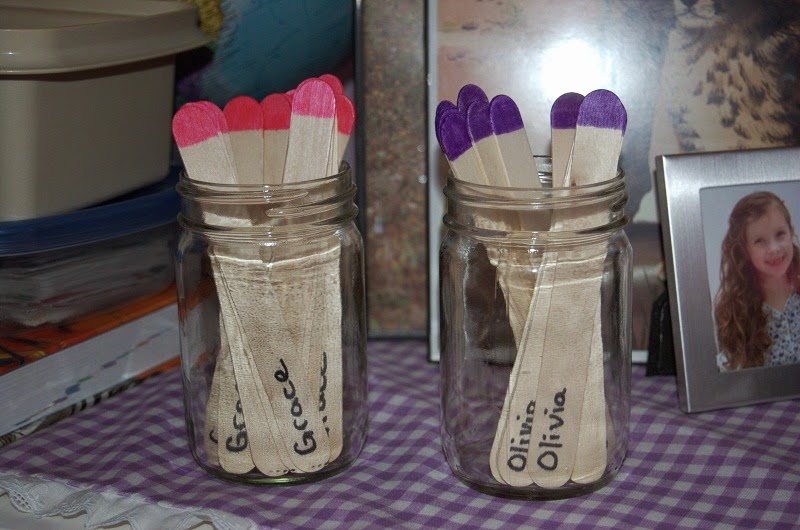 For that partial month, the daily jobs required to keep the stick were 1) empty and put up lunchboxes when getting home from school 2) all shoes and socks where they belong and 3) they get ready for bed when told without nagging or delay. This third job entails several sub-jobs which are put on pajamas, put laundry in the dirty clothes basket, brush teeth, go to the bathroom, wash hands, and get clothes out for tomorrow.

That first month went okay. There was much wailing over lost sticks when I found wadded socks all over the house, but they took pretty well to the idea of having jobs and the number of stray socks in the house diminished significantly.

At the beginning of the September, I added trash duty to the mix. I gave Olivia the upstairs trash and Grace the down. Overflowing trash cans has long been a problem here. The ground rules are that if the trash is less than half full, she can leave it, but if it is half or more, it needs to be emptied and a new bag put in place. The bags are, of course, our never ending supply of plastic grocery bags. The one exception to the half full rule is the small trash can under the kitchen sink that needs changed daily since that's where the stuff that rots goes. This particular trash can is the primary reason Grace was assigned the downstairs. Dave and I kept duty over the large kitchen trash can where the girls were to deposit their bags and the baby diaper trash can.

I expected a lot of problems with trash duty because, yuck, trash, but to my amazement, after it was all explained, they all took to trash duty like it was Very Important Work including Sam. He helps! Our overflowing trash can problem of many years enduring disappeared overnight.

The first six weeks of the sticks were fairly successful. The only real complaint I had is that I felt like I was having to do a lot more reminding than I wanted. Honestly, though, it was Olivia needing most of the reminders. "Now what are my jobs again?" She is only six so I have to remind myself not to get frustrated with her because, really, she is only six. Grace generally doesn't need much reminding at all. And if she happens to lose a stick one day, she gets so upset over it. Crying and wailing and "It's not fair!" but I hold her to the standard and encourage her to do better the next day.

From the beginning, I really wanted to give them the responsibility for keeping their room clean, but their room was in such a state that I could not expect them to organize it. The job was too big for two little girls. They needed a clean slate before I could reasonably expect them to keep it up, but that had to wait until I had the opportunity and time to clean it up. Since I was taking the week off of work during the girls' Fall Break from school, I decided the first full week of October would be the perfect time to get the job done. I complain about doing it here.


Since they share a room, they immediately wanted to know if they would be responsible for the other person's mess. Oh I had read about that question before. I immediately deferred to the Bearing rule which made perfect sense to me:


When I check your room, if I can tell that one person has done his share and the other hasn't then I'll only take that person's token -- for instance, if one bed is made and the other isn't. But if I can't tell, like if there's just a bunch of laundry on the floor, I'll pull both tokens.

Neither girl loved this answer. I also clarified that they were ultimately responsible if Sam or Marian came in and made a mess. Yes, we would require Sam or Marian to help pick up as their ability dictated and yes, we would help them clean up a mess not of their making if we could, but at inspection time, it was to be clean or the sticks would be lost. Again they didn't love this answer, but I think they both accepted it and there wasn't too much argument about it, only clarification and discussion. 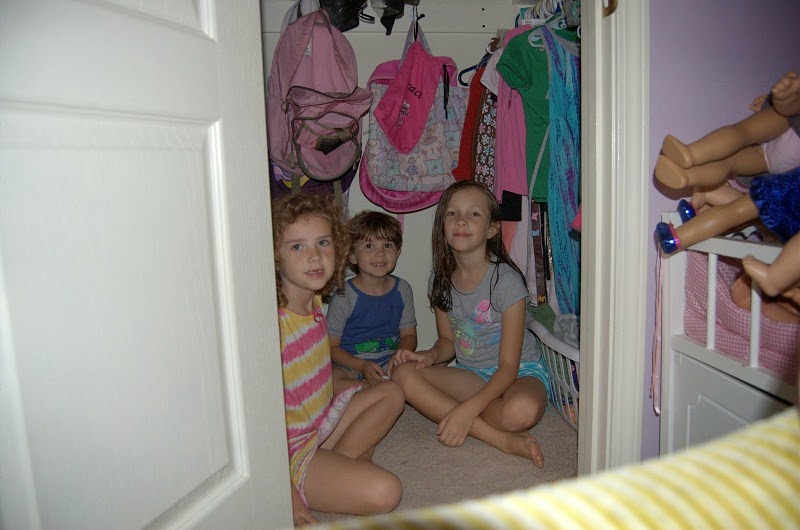 So here we are in the third month of this experiment and the areas for which the girls have responsibility have definitely, definitely improved. But now the rubber hits the road. Can the girls keep their room clean? I surely hope so. Stay tuned.
Posted by Jenny at 10:02 PM

I can't wait to hear how it turns out.

This is great. I wonder if I could implement this with my 16 and 13 year olds. Their room is always much worse than the room with 4 kids in it. We have no money but maybe their towns could be episodes of "the office" hmmmm. (Only half joking. ..something must be done).
Great job cleaning the girls room. That is such a good feeling.

I do worry about the long term viability of the project due to the low dollar amount. While our maximum monthly payout is $15, I'm pretty sure a 16 year old would look at you like you were daft if you tried to trot out a $7 a month allowance. But it is working for now!

I think non-monetary rewards can work well. I have a local friend who uses computer time to bribe her teenaged son into doing his daily number of steps on the pedometer. She says it works pretty well. If you find the right carrot, I imagine they'll play along.