At long last the week arrived. The children were all gone. Well, not all the children were gone. I had exactly one lonely Ella with whom to contend. She spent the week quite fussy in the suddenly silent house. Now the moment of truth arrived where I would face down the dragon of the girls room.

This room hasn't been cleaned with any urgency since the Darwins visited our humble abode for an overnight back in 2015. Even then there was a lot of artful hiding rather than true organization. This time, I wanted to sort and organize and clean in earnest.

Here is how the room looked before I started, but I cannot call them before pictures. You see, when I cleaned out Sam and Marian's room the previous week, the older girls felt something move within them and decided maybe living in a trash heap was not an ideal situation. They brought in a 30 gallon garbage bag and filled it half full with detritus, found all their dirty laundry and put it in a basket to be washed, and located fifty, yes FIFTY, stray dirty socks whose matches lived in the stray sock bag. Thus the room in these pictures, believe it or not, is noticeable cleaner than it might have been a week prior. 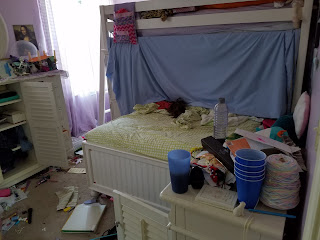 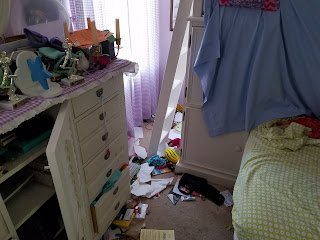 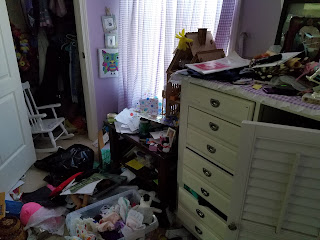 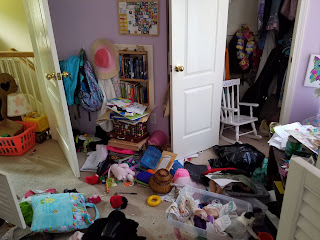 So there it is. Weep with me.

Honestly, taking on this room was psychologically challenging. I was hoping to have already been finished with it before the children left for Grandma's for the week.  I knew I would run across items that would require consultation. There are so many papers that looked like trash to me. I didn't want to throw away some treasure, but I also needed a lot of these papers gone.

Every day I entered this room with my headphones on, wearing a baby, armed with a garbage bag. 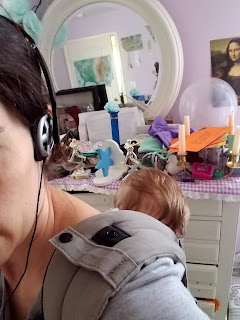 Occasionally I would convince baby to spend some time in the play pen. Inexplicably, I did not take any pictures of these magic moments, but here is the corner of the play pen, which took up a large portion of the open space of the room. I pulled the nightstand out into the next room in order to make room for the playpen. 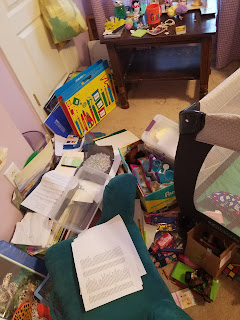 It took me three entire work days to pull all the stuff out of all the places. If there was a spot where a paper (or sock or chapstick or barrette or tiny something) could be shoved, it was definitely full of stuffs. Oh, the garbage I found. It looked as if entire bags of candy had been eaten while the wrappers were tossed thoughtlessly to the floor. I do not understand. I am not strict with candy. They eat candy probably four days a week. My only real rule is that they do not take food--any food--upstairs. And yet candy wrappers were shoved under every available surface in failed clandestine attempts.

So how did I pass the time as I worked? Back when I was working in an office, I listened to many, many podcasts, but since I have been home, my opportunity for listening has been extremely limited. I took the opportunity to fire up all the back episodes from Catholic in a Small Town. I yelled out in horror as Katherine announced she is now commuting over an hour each way to work in Atlanta. Noooooo. Don't do this on purpose!!!! I am now caught up to April and am waiting with bated breath to see how this is going to turn out. Will Kat say, "Take this job and shove it?" Stay tuned.

Once I got everything cleaned out, I had so many piles to sort. I had intended in the beginning to sort into piles as I pulled all the stuff out of all the places. I began strong, but I soon lost the motivation. So many piles. So many places. So much stuff. I eventually began tossing items in the general direction of where I thought it might end up. The decision fatigue was setting in hard. This is where I profess my love for Legos because I know exactly what to do with a Lego. It goes in the Lego box. 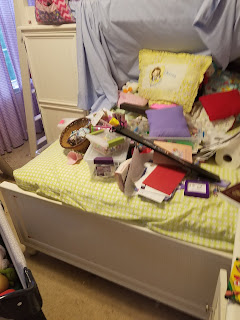 As I sorted the giant piles, I listened for a while to the memorial service for John Ward on YouTube. Ah, John Ward. How can I ever explain it? He was the voice of my childhood. We listened before we could ever see it. Before cable sports, there was the Vol Radio Network and always John Ward telling us what happened. You think your radio guy was the best, but you're wrong because John Ward was the best. THE BEST. It was sad realizing no one in my house could possibly understand.

Eventually, I whittled the piles down to reasonable. I purchased a paper box for each child which they will be allowed to keep their papers in. All papers in the box. All paper outside the box must be trash, right?

After five long working days and a full grocery bag of trash to accompany each day, the room was ready to be vacuumed. Vacuuming took a long time. I vacuumed under every surface. I even moved the bed. 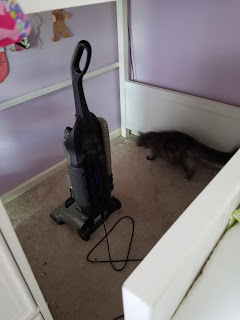 I had to vacuum a literal pile of dirt. A potted plant fell a long time ago. I am not sure when. Years may have passed. I really don't know. The vacuum had to be emptied three times as I vacuumed this room. 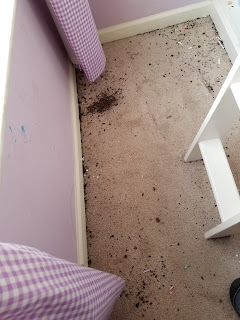 Finally, the room was finished. Really finished. It isn't perfect. I did not sort shoes or drawers or books. Yet it is so, so, so much better than before. The afters: 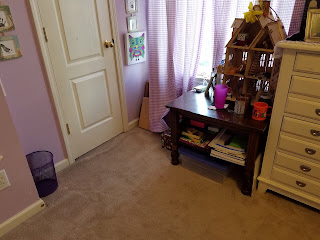 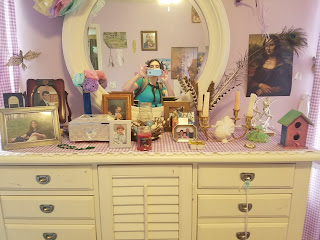 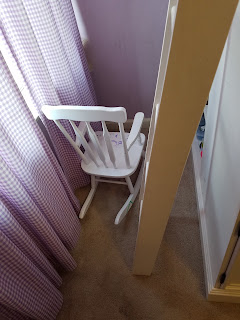 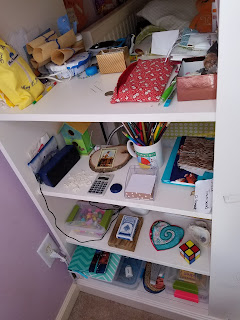 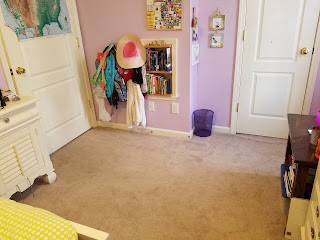 When the girls arrived back home, they were so excited and even grateful. I think they were paralyzed by the mess and did not know how to fix it. We talked about practicing the habits that will keep the room clean. These habits will be strongly reinforced in the next few weeks and I certainly hope I never have to spend five days cleaning out this room ever, ever again.

Next up: the bonus room. It's sadly not much better than the girls' was.
Posted by Jenny at 9:51 PM

Way to go! You really have a lot to be proud of here! Last summer, we were switching around the kids' bedrooms, which hadn't been thoroughly cleaned for a few years. I didn't have any time without the kids around, so I spent two weeks picking away and sorting whatever I could in half-hour chunks of time. That prepared the way for a weekend where my husband took over the kids and the house, while I worked away upstairs. I worked almost every available second of that weekend, and only just barely finished. We also have a rule about taking no food or candy upstairs, but worse than wrappers, I actually found discarded bits of food--apple cores and bits of toast under my son's bed (shudder!), and used kleenex was in every concealed corner of each room. And I didn't count the dirty socks, but good lord, there were many.

Ah, the used Kleenex. That is what made up a good portion of the 30 gallon bag filled the prior week by not-me.

Hi! I’ve been reading your blog for awhile... I applaud your brave move into stay-at-home-schooling life! I’ve got 7 kids—twins aged almost-12 down to a just-turned-1 baby. All girls except the 5-year-old boy and the baby boy.
I wanted to offer a stuffed-animal suggestion. We live in New Orleans, and always end up with waaaay too many Mardi Gras beads. Last year and again this year, I culled in this way: I chose a container, and the kids sorted/laid out/arranged the beads on the floor. Then they sat in a circle around the beads and the container. Each child chose ONE strand of beads to put in the container, and we went around and around until the container was full. So everyone had several chances to pick her “favorite” even though they were all going into a common pot. I stayed around to call “Last One!!”
We donated the rest of the beads, but maybe you could, like, box up the rest of the stuffed animals and put them way away—and if no one has missed a particular one in 6 months or a year, let them go.
I felt like this was a far, far more agreeable way to cull, because everyone felt like they were able to save the beads most important to them, PLUS they basically didn’t have to cooperate with their siblings’ choices—it isn’t like everyone had to agree that any particular beads were important enough to save; they just took turns choosing.
I realize each child would have fewer choices with bigger things like stuffed animals, but maybe it would work?
It also avoids the “oh, no! Not that one!!” because—if it’s really that important, you’ve chosen it already, right??

Hi Jenny, this was really well done, congrats. I dont wont to sound judgmental but I do wonder how things escalated to the point of having the rooms in such a state. I am not a very tidy person. I also only have 2 kids, and thankfully a large apartment. What I realise is that the key for some order to exists is: very very minimal amount of stuff can be brought in the house. And, kids need to keep their room tidy every day. I hope you can manage now to keep the order. It is very important for your inner peace as well! Again, maybe having many kids adds to the chaos, but then again, the more you have , the more important order is!

We have some dear friends from New Orleans so we, too, have the giant box o' beads!

The proximate reason for the mess is that I spent six months too sick to climb the stairs while pregnant and then had a newborn all while homeschooling three children and trying to keep a busy preschooler occupied.