The schedule of July has had me dragging out the bonus room work for weeks. A week of swimming lessons plus an additional week of dual session VBS commuting meant work upstairs never continued for long before duty called elsewhere. We are still swimming and walking and softballing too.

The bonus room is not extremely functional. Like most rooms in this house, it functions as a glorified hallway. Since the upstairs bedrooms are small, I strive to keep most of the toys out of them. (That's the goal, anyway. You saw how well that worked in practice. Oh well. Try, try again.) A consequence of keeping the toys out of the bedrooms is that the bonus room is the official designated toy room. It is the hallway to the bedrooms AND the playroom, but wait, wait, there's more! It also has to function as an office space. Because of all these different functions, the bonus room is going to have to be completed in stages.

The first stage of bonus room cleaning is getting the toys and sundry in order, which means in all these pictures, pay no attention to anything that looks like office stuff. Yes, I see the piles of boxes full of papers and the desktops piled high, and the bookcases in total disarray. I know it's there, but I am not getting to that part right now.

So, the before. This room is terrible, but it isn't quite as terrible as it looks. Just a couple of weeks, the children got all their sleeping bags out and then didn't get them put away--mostly because the bags went on the top shelf in the girls closet, but the short people could not get a stool in there because the floor was unfindable. That particular problem has been fixed. All that to say, a lot of what is piled on the couch was easily put away in a handful of minutes after the girls' room had been cleaned out. 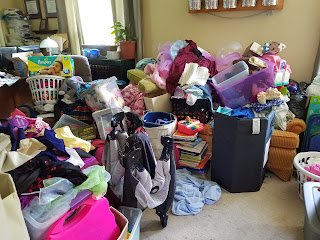 But still. It's pretty terrible. It has been ignored for a long while. A major problem in this room is that previous cleaning attempts by people who are not me have involved shoving a bunch of crap indiscriminately into boxes, making a neat pile of the boxes, and declaring the room clean. Then in short order a child, looking for something particular, dumps out several boxes until she finds the object of her desire. The other contents of those boxes may be spread around or shoved back in the box or shoved into a different box. The essential organizational structure of toy storage died an ugly death. 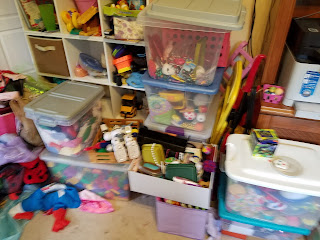 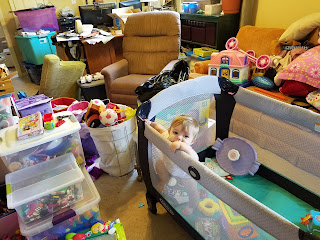 The approach I took in tackling this room was to first designate different storage boxes, whether canvas or plastic, for different kinds of items and then sort every free-floating item in the room into these containers while throwing away lots of junk and trash. After all the free-floating stuff was sorted, I then sorted box after box of doom and chaos into appropriate locations while still trashing more junk. 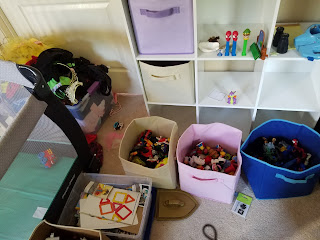 All of this was very slow work because I never got to work for very long stretches. As I cleared a box, I stacked it in the corner out of the way. I am amazed at all the empty containers. 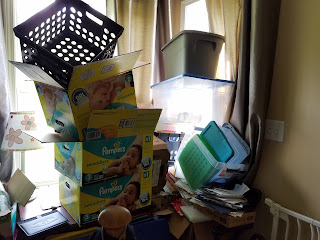 I honestly haven't done a lot of purging of toys yet, beyond junk and trash, because I felt like I needed to get like together with like before I could make any decisions. The one area I did purge out is the dress up clothes. We have entirely too much and they take up so much room. I had to get rid of some of it in order to make room for storing other toys. 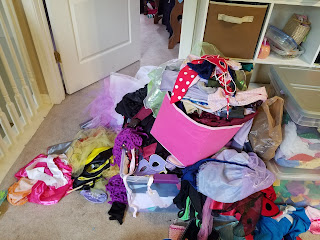 There isn't much to say here about process. I sorted and sorted. I ended up filling three diaper boxes full of giveaway items and a giant 30 gallon black trashbag. I eventually I vacuumed. Here is Ella in the carrier, while I vacuum out the very crumby couch. 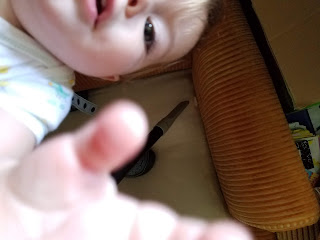 I am thinking about adding a bookcase or cubby something in this spot where the plastic bins are stacked. Any thoughts? I know we have too much furniture for the space in the house, but are low on bookcase space. 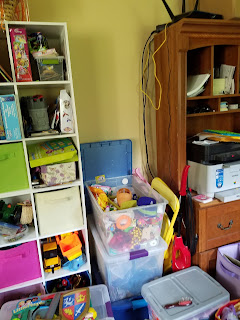 For your amusement, I once tried to bring the playpen upstairs by myself without breaking it down, which did not end well. I watched Dave do it multiple times so I could do it too, right? Um, no.

At long last, after more than two weeks of work in short spurts, the toy area of the bonus room has been cleared, sorted, and organized. 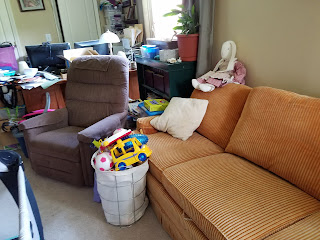 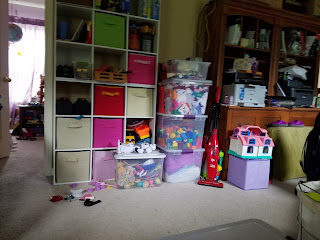 I still have a box of puzzles to make sense of and all the games, but I had to stop because I was suffering from decision fatigue. I am delaying actually purging out the toy categories until after I do a few other tasks because of the decision fatigue.

After this area was completed, I moved on to clothes sorting, but I didn't take any pictures because really, clothes in plastic bins. I have sorted two sizes, have one more to go, and am well on my way to filling another diaper box of giveaways. This is just the clothes that over overflowed our storage bins, not the clothes in the children's dressers. That's another day. And later today I will be going to my town's biannual consignment to buy Even More (redacted) Clothes! Because even though we have many overflowing bins of clothing, we don't have all the sizes necessary. Such is life.

There it is. Stage One of the bonus room complete.  I am undecided if I should return to the bonus room to purge toy categories next or if I should move on to my bedroom. This will be, of course, after recleaning the living room again. Because if I have learned anything, it's that the living room needs to be redone after every project in any other room.
Posted by Jenny at 2:07 PM