School ended about two weeks ago and the housecleaning has begun in earnest. Except not really. Between my swimming attempts and so many doctor's appointments--Marian got five shots and didn't even cry, but those eyes got pretty wide by the end--and other obligations, I have only just begun. The thank yous I said I would do before I started cleaning aren't finished either. I decided to take a write a little, clean a little approach. Also the week my children are gone on vacation to my parents' house has arrived and I am nowhere near working on the kitchen. That's the way it goes. It always takes longer than you ever expected.

Anyway, on to the first room! Well, the first official room. The first room was actually the living room, which had descended into a bit of squalor by the end of the school year, but is always in a semi-messy state so it doesn't really count even though it did take a bit of time.

The first official room is Sam and Marian's bedroom. The befores: 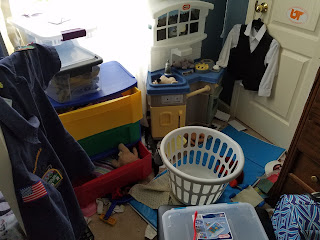 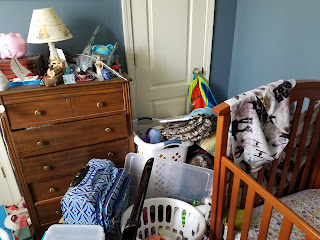 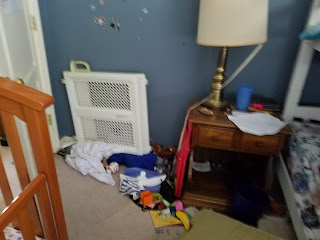 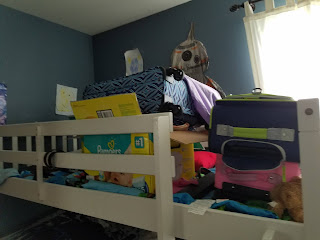 So there it is.  Yes, Marian, age 5, still sleeps in a crib. Yes, we have a bunk bed that has boxes of clothes in need of sorting and suitcases on top instead of a mattress. Baby steps.

Even though I am calling this part of The Purge, this is not the part where I purge. My strategy in the bedrooms is to get all the toys that do not belong out of the room, pick up the trash, and create a little bit of order. The real purge will happen in the room adjacent to the bedrooms, but again, baby steps.

There is not much to say about process here. Ella enjoyed her stint in baby jail, AKA Marian's crib. 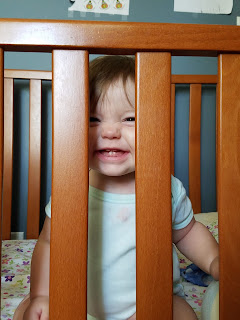 I filled two grocery bags worth of garbage in this little room. Does everyone's children take scissors to cut paper into little pieces of confetti to sprinkle all over their floors? Just mine? In the course of clearing the floor, I moved the pile of stuffed animals and discovered a half filled black trash bag. Who? Why? How long? 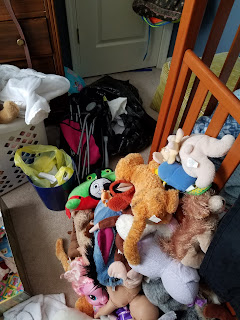 This discovery did lead me to develop a new theory of garbage collection.

I am about to reveal one of my neuroses to you. I feel guilty about throwing away garbage bags that are not full. Isn't it wasteful to under-utilize a bag? I should not throw it away until it is full, even if it takes a few days because then I am not wasting space or plastic.  I am being efficient with my supplies.

This, friends, is nuts.

My new theory is that I should throw away the bag at the end of every session, even if--gasp--it is not full. My peace of mind in guaranteeing the removal of garbage is worth more than the efficient use of the never-ending supply of free plastic bags from the grocery store. I have learned through hard won experience that if you don't throw out that half-full bag, the children will helpfully redistribute the garbage for you or, inexplicably, pile their stuffed animals on top of it. What's sad is that I really had to come to terms with this idea.

So in addition to my two full grocery bags of trash, I threw out the buried 30 gallon bag that had been sitting at the bottom of a pile for an unclear amount of time. Small victories.

And behold, after two days of work, the results: 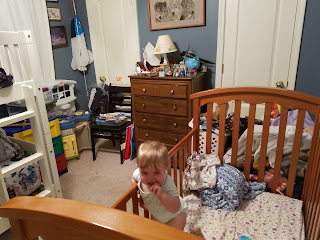 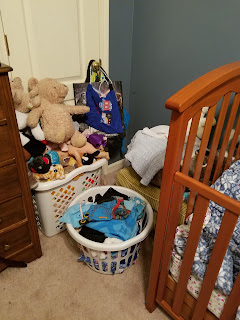 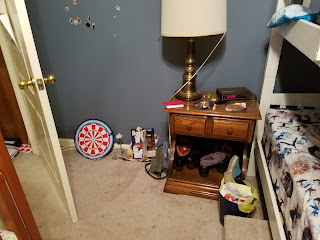 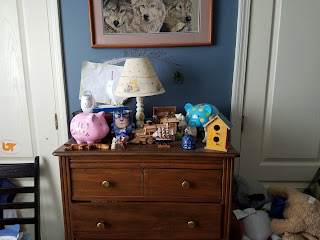 It's not perfect. I need to put hooks behind the door so their bags have a place to go. The top of the bunk bed still has suitcases and boxes of clothes that need better homes. (The clothes are in line to be sorted after the upstairs toy room is purged. Maybe?) The stuffed animal solution of cramming them all into that one laundry basket is not great. Maybe I should get a second basket? Trying to get the children to part with any of them is like pulling teeth. I have dusted nothing, and I need a solution for their personal papers so that they don't get spread all over the house. But it is a good start.

The next room is the big girls' bedroom, which is a horror. A horror. Wish me luck!
Posted by Jenny at 12:13 PM