If there is one area of my life where I spectacularly fail week after week, it is making a successful transition between work and home. I begin the week with grand ideas of what I am going to accomplish after work and end the week having done none of it.  Over the years I have discovered that I seem to require a certain amount of downtime before being productive at home. From an outside perspective, this time is wasted, but I can't figure out how to shorten or eliminate it. So week after week, I make big--or actually quite small--plans about certain tasks I want to accomplish during the week and night after night, I find myself zoned out unable to overcome the inertia in order to act. What this means in real life is that I am perpetually and utterly behind and the easiest thing to let go is cleaning the house. The house is always a dirty mess.

None of this changes just because it's December. If anything, it gets worse in December because there are so many activities that demand time on the weekends. Any time I would normally use to pick up is consumed by outside demands.

When I was a child, I remember my mother cleaning the house in preparation for Christmas. The specific task I remember most vividly was her dusting the television, which was a giant piece of furniture, putting away all of the pictures that usually resided there, and setting up the elaborate Nativity scene which had been built and painted by my granddaddy. Mostly what I remember is returning home from school or an outing to find the house completely transformed and then I knew it was Christmastime.

We would visit my grandparents' house and my grandmother turned Christmas decorating into an Olympic sport. If there was a surface that could hold a decoration, it had one: in the bathroom, in the kitchen, in the hallway, in the bedrooms, under the tree, on the TVs, in the bookcases, on the electric organ, EVERYWHERE. There were multiple trees and nothing was ever rotated out of the collection or tossed when it was old or broken. There was a place for every decoration she had. She adored Christmas and even after she went blind, you could describe a particular ornament and she would tell you where it belonged. You truly walked into Christmasville when you walked into her house.

I don't have any overriding ambition to recreate my grandmother's house. Honestly it was a bit over the top and I wouldn't want to deal with all the clutter, but to a child, it was magical. The most enduring thing about her house is that I have a definite idea of what Christmas should look like, and, well, my house doesn't look like the picture in my mind.


The house isn't cleaned before the decorations come out. By decorations, I mean the tree. We barely get the tree up before Christmas. We usually decorate it the Sunday before Christmas, not out of pious devotion for keeping Advent, but because that's when we get around to it. The table that usually resides where the tree goes gets moved into my bedroom where it is piled high with stuff that used to be in the living room. No, there's not really room for it in my bedroom; we just crawl around it while the tree is up. All the remaining debris from the living room gets unceremoniously dumped upstairs. The room upstairs is almost impassable.  The tree is decorated with some number of ornaments, not nearly what we own, but enough to declare the tree decorated. And that's it. No other decoration comes out. There is nothing in the bathrooms, nothing in the bedrooms, nothing in the kitchen. Just the regular dirty, cluttered house. I haven't seen my Nativity set in years. I feel like I am denying my children some of the wonder of the season.


I get most of the presents purchased before Christmas, although I usually forget or put off finishing something that requires organization until riding in the car to visit a relative, but nothing is ever wrapped before Christmas Eve. I get Christmas Eve off of work and it is usually a frantic madhouse day of wrapping and packing. There is a lot of yelling because I don't have time to deal with the children. I've got about 24 hours to do four days worth of work. There's plenty that doesn't get done. We do get to Mass at some point in the evening. I usually finish the day with the Pope on TV. The remnants of wrapping is left all over the kitchen table because it's late and I can't put it away without causing a ruckus.


When Christmas morning arrives, we open presents in a hurry while our view is marred by all the trash and supplies that I didn't get put away earlier in the morning and also by the Halloween trick or treat bags still hanging off the banister. Well, my view is marred; I'm not sure anyone else notices. We are always in a hurry because we have to leave. There are two separate households that expect us to make an appearance on Christmas Day. Both houses expect long, leisurely visits with full meals. There isn't really time for that. We rush through presents at home and then rush through presents and a meal at one house, and then rush to finish packing to leave for the other house. The packing isn't finished because I was wrapping yesterday. Hurry. Hurry. Drive to the other house and hope not to hear it because I'm late again. Hope nobody gets mad because we aren't really hungry since we already ate a huge amount of food at the other house.  That's happened before. Relax for the evening. The next day we are off again to the other side of the state to visit two more sides of the family. Everyone expects you to come. A day or three more of driving here, there, and yonder, and then we are home again. The house is still in the same disaster state in which it was left and now it looks like a department store exploded in it. It takes several days to dig out.

I always begin December thinking this year will be different, but it never is. I think I will take a day or two off from work to get the presents bought, to get the presents wrapped, to get the house cleaned, to get the house decorated, but it really isn't feasible. First if I took the time from work before Christmas, I probably wouldn't be allowed to take any extended time during Christmas. It's either/or and I choose the mess and time off during Christmas. Second, due to the nature of my monthly work cycle, it isn't really possible for me to be off towards the beginning of December. We compress our work schedule so the people who have afterhours and weekend transfer work do not have to work over Christmas. Thirdly, even if it were workable, I do not want to use up my entire year's worth of vacation time just trying to make Christmas fit the vision in my head.

I find myself mildly envious of those whose families live so close that visiting is not a production or those whose families are so far away that visiting is out of the question or those who get enough time off work to be able to make all the arrangements, travel beforehand, and are able to relax and really visit over the holiday instead of rush, rush, rush.


It is not entirely a lost cause. I have an Advent wreath which we light every night at suppertime. I always make sure we have candles to burn in it even if some years the pink candle is red. It isn't exactly a traditional Advent wreath because instead of greenery, it depicts the Holy Family. I figure since the likelihood of the Nativity scene coming out is small, it's a decent compromise. The children take turns snuffing the candles every night. There is a strictly held schedule for whose turn it is to keep the arguments at bay. They are extremely diligent about lighting the candles; we cannot forget, they don't allow it. When Christmas draws near, we sing the appropriate verses of O Come O Come Emmanuel in honor of the O Antiphons at bedtime prayers. Both of these are firmly established traditions in my house and are certainly things I never did growing up. 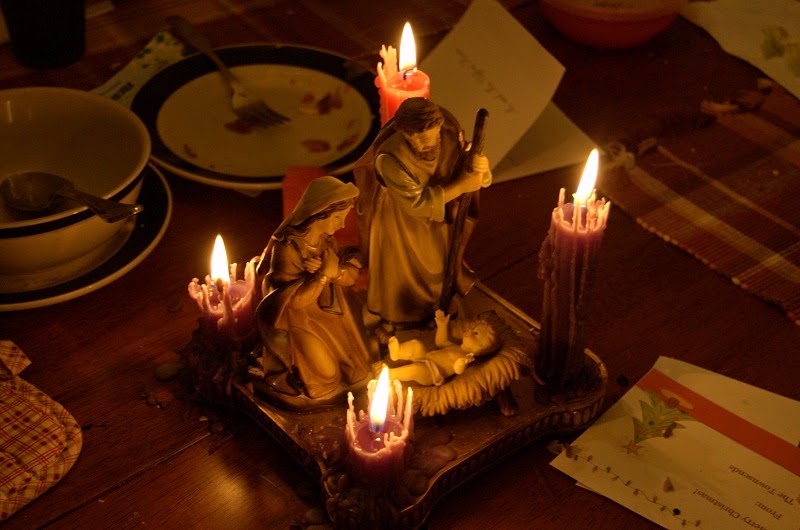 Is it enough? I have no way of knowing, but it is what it is. Do the children feel the rush and stress that I do? Do they feel like Christmas is a haphazard affair like I do? I don't know. I hope our little household traditions convey the meaning of the holiday and that they can cling to them instead of needing more of the external trappings. Just because I have a notion of what Christmas should look like doesn't mean that they do. Maybe they haven't noticed.

Email ThisBlogThis!Share to TwitterShare to FacebookShare to Pinterest
Labels: faith, me and my issues, motherhood, working

What a beautiful Advent candle holder!

I don't see how anyone working full time plus commuting could possibly achieve those Christmas goals. Heck, I'm home all day and can barely get the house clean and presents wrapped! Then I go into bitter mom mode about doing Christmas all by myself. When I do get some time away from the kids, I need space to decompress instead of cleaning!

I wonder if there are any simple changes that would relieve a little of the pressure, like switching to gift bags or wrapping things in your car at lunchtime. Or doing a one-time house cleaning service the week before Christmas?

I don't know. Most of my problem could probably be summed up as bitter mom mode. I should make the best of it instead of grouching about what doesn't happen. But the Christmas Eve crunch is real. I should do a better job with the long range planning: start seriously prepping Christmas at the beginning of November instead of waiting until December. Christmas seems so far away at Halloween, but it really isn't. Of course I could write another post about how I fail Halloween every year too. :D

So the moral of the story is I need to think ahead more than I do.

Hm, it is sort of like the image for you because you have so much activity related to the season.

Connecting with loved ones is it.