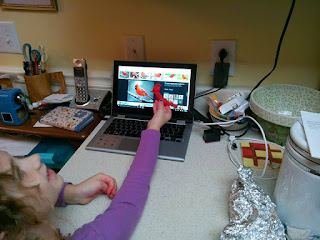 The general computing policy in our house in regards to our children has been a flat no. There have been exceptions over the years where a child is allowed to play a game from school or do some research on a topic or, um, write a short lived blog about cheetahs, but in general, we did not want our children spending much time on a computer when they had other, better options in life.

With the advent of homeschooling, that policy had to change. I made heavy use of Khan Academy at the beginning of the year so the girls needed to have easier access to the computer. We have Windows 10 (yippee </sarc>) and so we set up a separate profile for the children to use for their schooling. The separate profile came with its own password. We set their account up with restrictions to protect them from the wiles of the internet, but I am not naive enough to think these restrictions are foolproof.

Still, I did not want them to have free rein to run all over the computer. There are better things for elementary school children to do than spend all their time playing computer games. Not to say that they could never play a computer game, but I wanted to keep a handle on it.

The general advice is to put the family computer in the family room so all computer use can be supervised, but that is not feasible at my house. There's no room in the family room for a computer set-up. Heck, there's barely room for a couch. So contra best practices, the main computer is upstairs in the office/playroom/den/hallway/room-that-holds-junk. The expectation for computer use is that the children may log-on without permission if they are going to Khan Academy. All other use must be cleared with a parent first.

At first, this expectation was fairly well abided by, but over time and as they became more comfortable on the computer, they began to wander. They would leave the computer and I would find remnants of books examined on Amazon or websites aimed at children or digital copies of the latest installment of cat clans forever at war. I would remind them they needed to have permission before going to these places and they would nod that they understood and then do the same thing again tomorrow.

I had the niggling thought in my mind that I needed to put my foot down and change the password, but I never quite got around to doing it. If I changed the password, I would have to log-in for them every time they needed the computer. That's a pain and out of the way, and besides even though they were in rank disobedience, it wasn't like they were going anywhere bad. So this little game played out for months while I generally ignored it in favor of bigger fish to fry, hoping they wouldn't accidentally stumble into some place of horror.

And then it happened.

One day, I sat down to a computer that had obviously already been used that day without permission granted. As I sat down and waited for the computer to wake up and the darkened screen to come to life, there, before my eyes, was a sight that let me know that the time had come to immediately take action. I knew in that moment that I had been abdicating my parental responsibilities for long enough and I needed to rectify that failing immediately.

One of my children had created for herself an illicit Candy Crush account. Candy Crush, yall. No. Just no. This game was going to be nipped in the bud, right now. I immediately pulled up the computer profile information, changed the password, the password hint, and then I waited.

After a day or two, a child nonchalantly brought up the subject of computer access. The fact of her flagrant violation seemed not to cross her mind at all. That her password no longer functioned did not seem to signal to her an end of her trespasses, but only a technical problem in need of resolution.

So this child, blithely, at suppertime says, "For some reason when I type in my password on the computer, it doesn't work. I clicked on the password hint, but it doesn't say 'Tennessee Vols' anymore."

"Oh really. What does the password hint say instead?"

"Really? That's interesting. And what, exactly, should you do?"

Email ThisBlogThis!Share to TwitterShare to FacebookShare to Pinterest
Labels: children