The Pantry, Part I

That fine day arrived, the children were safely shipped to Grandma's, and I approached the chore I have spent three months hiding from: Cleaning the pantry.

Let us review the before pictures: 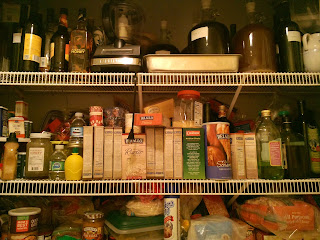 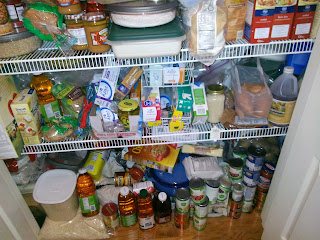 This pantry has suffered years of neglect and shoving. Now it's true, there is a general scheme of where things are supposed to be and, if you are the official loader of the pantry, you generally know where you put the things you just bought. However, for those of us who only open these doors as a last resort because the official pantry loader is at work, this pantry has been an ongoing source of despair. 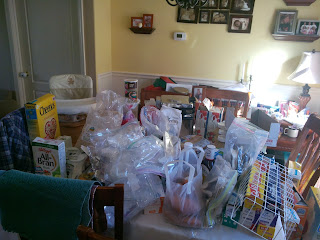 I quickly ran out of room and trailed over into the living room. 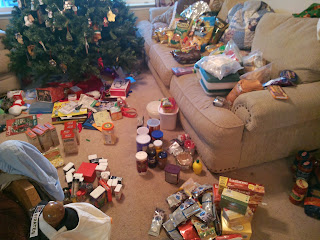 Along the way, I filled two entire garbage bags with trash, expired food, and items that just needed to leave my sight. 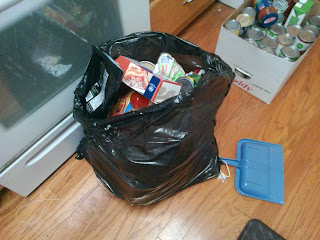 Why yes, those are eight empty oatmeal containers that were floating in the closet. 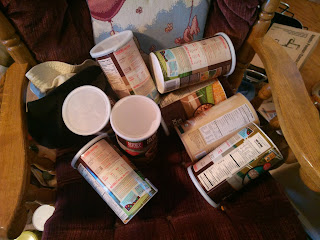 As everything spilled into the living room, I decided to begin to sort as I went otherwise I might never finish. After everything was pulled out of the pantry, I discovered that we had accumulated twenty-six pounds of pasta. 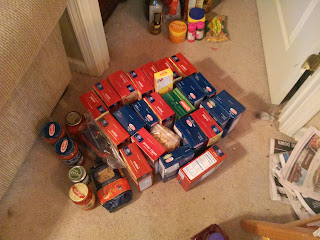 If you come to my house, you are probably eating pasta.

So finally at long last, the pantry was empty. Also it was supper time. I called Dave and told him to pick up the children and take them somewhere, but to not come home for as long as possible. 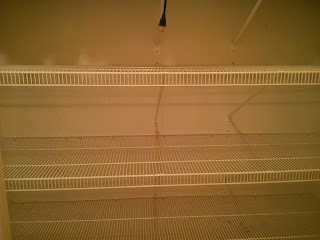 It had to get worse before it was better, and we were right at worse. I neared despair as I wondered what I had done and if it were possible to fix it again.

Now the children were home. Dave smuggled them upstairs through the disaster as quickly as possible. Marian paced the living room exclaiming, "What in the world?!" over and over and over.


I got soap and water and scrubbed nearly ten years worth of muck out of the closet. Then I made a bleach solution and wiped everything down. This pantry was as clean as I could get it.


I began the task of getting things back in the closet. I couldn't take too long in the decision-making process because a) it was late b) the children were going to be home all day the next day, and c) we had out of town company coming. Before the evening was finished, everything I wanted back in the pantry found a home. 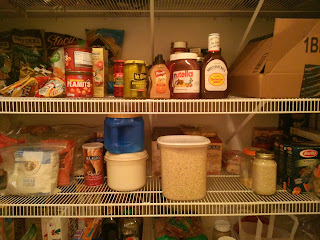 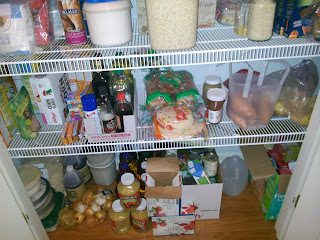 The Amazon box up there is full of spices that I want to move into a cabinet. I have to clean out the cabinet first. It's a never-ending cycle of shuffle the stuff around. Look at our pasta corner. Twenty-six pounds, y'all. 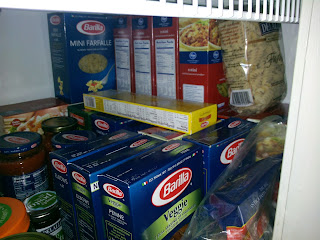 I know where everything is now! I can find food in the pantry! Opening the door doesn't induce weeping anymore!

We have some ongoing issues. First, what to do with the cans. Right now they are stacked in an apple box on the floor. That's not a great organizational system. What do you do with your cans?

Second, is how many containers should I get to store baking goods. On the shelf to the left, you can see ten open bags of various products stored inside plastic freezer bags. Should I get a permanent container for all ten of them? I have a few I can use, but decisions have to be made about what to keep and what to buy.

Once I figure out what to do with the cans and baked goods, I will have to pull out the pantry again and reorganize it, but it should not be nearly so painful the next go around.

The biggest issue with the kitchen right now is what I did not put back in the pantry, but do not necessarily want to get rid of. We have floating items that need a home, but I need another day to clean out another cabinet. Floating homeless clutter drives me a little crazy, but we have had illness and company and now school starting up again. I will have to purposely carve out time to work on this project.

My hope is that by the end of this adventure everything in the kitchen will be useful, organized, and have permanent locations. I hope that the trash will leave and our overstock will move on to new homes.

Email ThisBlogThis!Share to TwitterShare to FacebookShare to Pinterest
Labels: housekeeping

And pasta once a week for 6 months!

Scrubbing was not optional!