Joining in again with Melanie at The Wine-Dark Sea for Guilt Free Learning Notes. 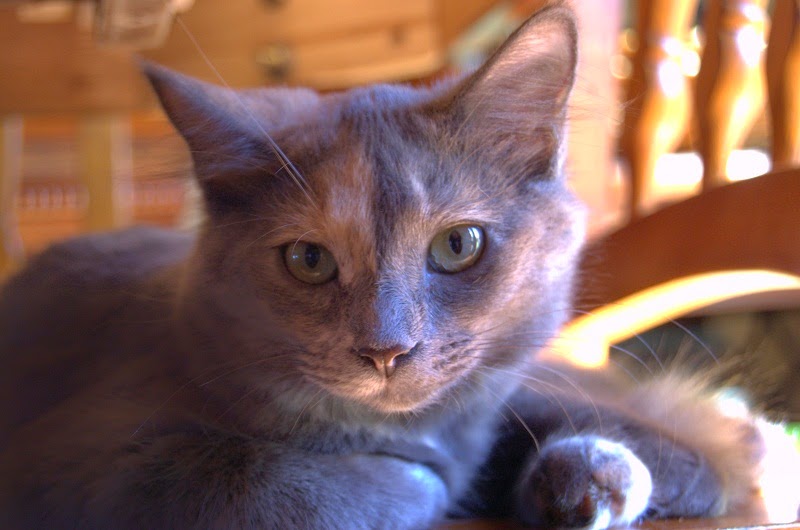 Dave and I had a cat for years whom we loved, but she had a kidney disease that required a cheap, but consistent treatment of subcutaneous fluids. Over time, the costs add up plus the vet and the litter box and all the other things, so after she died, we decided to wait until a child was old enough to do most of the work before getting another cat. And we hope this new cat won't cost as much as the previous cat.

But cat is what happened all day. I'm not sure who was more stressed out by the children stalking the cat all day, me or the cat. I think probably me. I can't wait for the new to wear off after a few days because the hovering is driving me crazy.

After I got home from work, but before supper, Olivia and I read a shark book from school. She squealed her discontent with the pictures every time we turned the page. I asked her if she had picked the book out herself. She answered sheepishly that she had but didn't look in it before choosing it.

Olivia had guidance where she watched two videos but couldn't tell us what they were about. After awhile she decided they were about self control. After they watched the videos, they had to draw and write while listening to music. She immediately announced one of the songs was "Let It Go." The irony was too rich to keep from laughing. After encouraging self-control, the teacher played "Let It Go." Hello? Grace had PE, I think.

During supper, Marian started putting food down her shirt for reasons that only toddlers know. Grace, highly amused by this antic, immediately started recounting a scene out of  "Tales of a Fourth Grade Nothing" in which Fudge is told to eat his food or wear it and ends up dumping food all over himself. She read this book in third grade so she proved that it is indeed possible for a third grade child to read and discuss books.

After supper, Marian had a monstrous dirty diaper that required some assistance in keeping her distracted while I cleaned her up. Olivia came in and launched into this dialog: "What is your name? What is your quest? What is your favorite color?" I swear she hasn't seen the whole movie. Really.

I signed two agendas, examined a progress report, and checked some math homework.

The girls had cross-country practice today. Grace had guidance and watched the same videos that Olivia had watched the day before, but she did not get "Let It Go" afterwards. Poor Grace. Olivia had technology class, but instead of having class, they watched videos because some third grade child had to finish a test on the computer so they weren't allowed in the lab. Mixed feelings about this. Why are they taking tests on computers? That's stupid. Why is one child's need to take a test allowed to derail an entirely different class's schedule. However, it's technology class. Who cares?

Grace had a substitute teacher and got fussed at in class for having the temerity to look at the ceiling while she thought about her work instead of staring at her paper. She was very offended. She got a lecture about staying on task and how that teacher was trying to get her ready for fifth grade. As if the sub has anything to do with that. Apparently some boy jumped to her defense and she tried to show her she was doing her work, but to no avail. We laughed about it and told Grace not to worry about it. Some subs are just like that. Grace really hates to be thought of as not doing her work. Olivia has had this sub in the past too and doesn't like her either so they exchanged terrible sub stories.

I read "Smokey the Fireman" by Richard Scarry to Sam and Sam sat with a pile of books "reading" to himself. The book he paid the most attention to was "Not Your Typical Dragon" by Dan Bar-el. He somehow managed to empty most of the bookcase.

Grace read "The Sword and The Stone" out of a Disney storybook to have something to put down on her reading log. She also finished writing her first post on her cheetah blog so she is officially published. We shall see how often she puts new stuff up. She stayed up way past her bedtime reading something. I'm not sure what she was reading since we were more concerned with her turning out the light.

The girls had their first cross country race of the season. The race is a mile course set through a local school's campus. They both did well and finished in the middle of the pack. Olivia ran really hard, but I think Grace set too slow a pace for herself. She is the queen of pacing. Since the course is just set off by flags and cones, the spectators can get close and follow the runners around the track. Dave was running around with the video camera. I had Marian in the carrier and Sam by the hand and we staked out spots along the route. The girls would run by, we would cheer and then hurriedly move to the next convenient spot along the route. Since the girls are in two different age groups with different races, we did this twice. I can't say I ran a mile, but I did haul myself around quite a bit in the hot sun and was very tired from the effort.

We decided to eat supper at Chik-fil-a. Not much conversation there. I learned Grace had art class and is still working on her pancakes and Olivia had PE, maybe? Mostly we ate in silence. On the ride home, I frantically filled out two Girl Scout fundraising forms, wrote a check, and filled out two Girl Scout health forms for us to drop off on the way home since the girls had to miss their meeting due to the race.

At home I tried to read three newsletters that came from school and check some more math homework, but I couldn't make my eyes focus. I signed two agendas and worked on getting everyone in bed as soon as possible. Grace was very excited about getting comments on her blog post so I did let her respond before shooing her to bed. There was also some "discussion" about the reading log and not getting the opportunity to read for twenty minutes. Just go to bed and make it up tomorrow!

I got home from work to be greeted by Sam who was very excited about the apple seed he had planted. He explained when it was big enough, he would transplant it out of the cup and into a pot.  I am also happy to learn that the coveted plastic monkeys are now in the house. Olivia is pleased as punch. These things are cheap, cheap, cheap and will be broken within the week.

At supper we discussed European vacations and suppertime in Rome because, hey, we live vicariously! Grace had technology class and Olivia had library. She checked out the Magic Tree House book "Twister on Tuesday." I immediately told Grace not to read it because she has a fear of storms and we don't need to encourage it.

Grace is working on two digit by two digit multiplication in math enrichment and she is feeling unsure about the algorithm. Well she said she didn't know what to do so I asked her to work a problem so I could see where she had trouble. She didn't have any trouble so I think she just wanted someone to watch her work and make sure it was right. We worked a few problems together and I showed her the trick about moving the number over if the bottom number ends in zero. I also showed her that lining up her columns works better and eliminates any confusion about what to add together. So we had a nice little math lesson.

I meant to read the shark book with Olivia again, but she went outside to play for a few minutes after supper and I completely forgot about it by the time she was back in the house. While I was picking up before bed, Sam found a book that had large letters on it and wanted to practice naming letters. He was pretty sure the words said "The Columbus Zoo," but alas, it only said "The Zoo Book." He is getting decent at the letters. I would have to drill him to see how many he knows, but I'll guess it's about half.

Marian has started pointing at letters on shirts and trying to say something about them. I won't say she is naming the letters because she is not, but she is recognizing the letters are something that have names. Grace had this same behaviour as a young toddler and could name most of the letters by age two. Just saying, here we go again.

Signed one agenda, learned that I apparently forgot to sign one of the agendas yesterday even though I could swear I did, looked at the circle of shame where my initials were not and saw where Dave signed yesterday's and today's, and signed the reading log even though it is incomplete.

Supper was dominated by me going on and on about a conversation at work that greatly disturbed me that I ramble on about here too. The reason I mention it now is because it was funny to hear the girls chime in. Grace, who is always looking for affirmation, did her best to argue my points and show outrage on my behalf. Olivia, who has always been a bit more independent, was getting frustrated and saying, "They have their own brains. They can make their own decisions." In and amongst the parenting philosophy discussion, the girls were arguing over the casting in the next movie they make with the Darwin children. Grace was telling Olivia she had to play the youngest girl and Olivia objected saying she didn't want to be the youngest again. Grace said Olivia had to be the youngest unless she could convince the youngest Darwin girl to do it. And thus they argued for a long while.

Around bedtime I told Grace I was listening to "The Odyssey" in the car and gave a very brief plot overview. She wanted to know when it was written and then tried to remember which Native American groups were prominent at the same time. We then discussed what A.D meant and whether or not Jesus was born in the year 0 (no).

Signed two agendas and Olivia exchanged the shark book for something else.

Marian woke up this morning and promptly threw up all over me. She is puny and running fever, but the vomit seems to have been a one-off event. The other children are being incredibly whiny. We watched a football game and then spent a couple of hours at my sister's while my parents were there babysitting. And that's it. Football and playing with cousins are educational too.

The girls keep trying to edit the movie scenes into a more cinematic format, but we're having trouble figuring out iMovie. However, they did put them all into a slide show, which produces a jerky final project, but the young don't care. So the movie fervor lives on!